Gold Rush
The lures of money, adventure, and challenge have always been strong driving forces. From the earliest days of recorded history, men and women have pursued wealth and a better way of life. So it was in the 1800’s. California had received its statehood and the Civil War was over. Due to the Gold Rush of 1849 and the Homestead Law of 1850, which made it possible to purchase federal government land, settlers poured into California by the thousands in search of a new way of life. A land rush soon followed.

Forest Treasure
In 1888, two businessmen named Austin Moore and Hiram Smith purchased thousands of acres of timberland in Tulare County for the purpose of logging the giant redwood groves. After forming the Kings River Lumber Company, they began the construction of two saw mills and a wooden flume, connecting the mills with their lumberyard in the valley town of Sanger. After several years of operation, the Kings River Lumber Company met with financial difficulties. On October 15, 1894, the company was reorganized and became the Sanger Lumber Company. With the reorganization came an expansion into the mountain area known as Converse Basin. Although the logging operation was large and involved at Converse, the Sanger Lumber Company continued to lose money. The owners decided to sell the company.

Hume-Bennett
Among the several potential buyers of the Sanger Lumber Company was Ira Bennett. Bennett was the general manager for the American Lumber Company of Albuquerque, New Mexico. He did not, however, have the finances to purchase the company by himself. He turned to one of his former associates for financial backing: the wealthy Thomas Hume.

A Lake is Born
In 1905, they formed the Hume-Bennett Lumber Company. It quickly became apparent that the main mill would have to be moved for the lumber operation to be profitable. The new site for the mill was a grassy table called Long Meadow–four miles east of Converse Basin. After looking over the new area, it was decided that a dam and lake would be needed for log storage. The water from the nearby Ten Mile and Long Meadow creeks could then be used to transport cut timber down the existing flume with its new seventeen-mile extension.

Cracks in the Dam
Between the years of 1907 and 1912, the relationship between Thomas Hume and Ira Bennett deteriorated. Eventually, Ira Bennett was removed from his position. The rigors of business, lack of profits, and a devastating fire in 1917 that consumed over $500,000 worth of lumber, eventually forced the Hume-Bennett Lumber Company to close its mill doors. The operation concluded in 1924. The holdings of the Hume-Bennett Lumber Company were purchased by the federal government on April 8, 1935. The selling price averaged $14.93 an acre.

God’s Secret Plan Revealed
In 1945, several hard-working, Christian men came together in the valley town of Dinuba to discuss plans for a Christian Bible camp. They began regular prayer meetings to seek God’s will and plan. On January 9, 1946, these men purchased 320 acres of lakeshore property, including the Hume Lake Hotel, store, service station, post office, 22 cottages, and 22 boats. In the summer of 1946, 670 campers attended Hume Lake Conferences and were attended by 15 volunteer staff. The vision, patience, and labor of these men, in response to the Holy Spirit, birthed Hume Lake Christian Camps.

The conference center grounds are dedicated to the glory of God and the proclaiming of the Kingdom of His Son, Jesus our Savior. Since that first summer of camping in 1946, more than a million young people and adults have been exposed to God’s love and wonderful plan for their lives.

They Felled the Redwoods

History of the Sierra Nevada 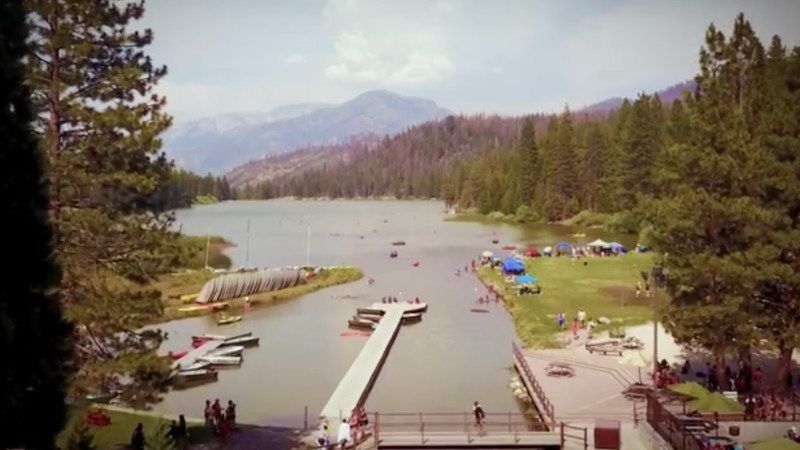 Join us for an amazing

We’ve opened our lodges and cabins to families and couples! Come up the mountain to worship, hear the Word, and spend time playing together in God’s creation. It’s the best place to be this summer! We’re bringing Hume to you! With chapels hosted by our Camp Directors, you’ll get to participate in worship, play “virtual Rec” games, watch theme videos, and hear from Hume speakers. You don’t want to miss this! We need help this summer!

As you know, things are a bit different at Hume this summer. The good news? The Lord has made it possible for us to shine His light in some wonderful ways, and we really need your help to make it happen!